Menu
Log in
Let our Light Shine!
If your child displays any of the four symptoms of Coronavirus they must self isolate. You must book them in for a test and inform school of this as the reason for their absence: Temperature, Cough, Loss of Taste, Loss of Smell. Please also ensure you are wearing a face covering at all times whilst on school site. Thank you for your co-operation.

In June 2014, St Clare's was approached by St Hugh's to ask if would we consider working in partnership with them with their Gospel Choir as their numbers had dropped. We jumped at the chance and so began our journey.

We meet for one hour after school on a Wednesday from 3:30 - 4:30. St Hugh's very kindly transport us in their minibuses so we can be on time for rehearsal and parents then collect their child from St Hugh's.  At present we have 25 children from St Clare's ranging from Year 3 through to Year 6 and St Hugh's have similar numbers.  The children enjoy meeting their friends each week and bringing the two schools together gives a sense of community to the project.

The choir is directed by Mel Birkett who is the creative Director of Halo Performing Arts and a highly experienced conductor of gospel choirs. She is a committed Christian and also co-directs the adult Love and Joy Gospel Choir based in Anfield.  One of the reasons the children love coming to choir so much is the variety of music that Mel introduces. They have sung a variety of gospel music including traditional with African roots as well as contemporary pop and rock gospel. Michael Jackson is a favourite as well as more recent songs for example, Uptown Funk, in which Mel changes the words slightly to fit in with the Gospel Choir.

Our choir is supported and partly funded by CARJ -  the Catholic Association for Racial Justice.        "CARJ is an independent charity and works to support people from diverse backgrounds and to support and empower black and minority ethnic Catholics"

CARJ have been a great help in setting us up and over Christmas it was lovely to see that at every venue a different member of their team came to support us. A few of them came to two or three "because we just love hearing and seeing them!"

In October 2014, CARJ fully funded all our t-shirts and they came up with the idea of a competition to find a logo and a name. Consequently Isaiah, then in Year 3, suggested "Circle of Voices" as our name and Ava, then in Year 2, drew our logo. CARJ have, since then, had a 'pop up banner' made to display at any performances that we do.

Over the 16-17 Christmas period, the choir sang at no less than six different venues in just two and a half weeks! Each session was 40 minutes with the choir singing eight to ten different songs. On one day they sang in two different places in one morning! These included: the Anglican Cathedral for their Action for Children concert; Liverpool One; the Royal Liverpool Hospital; Asda, Wavertree; Our Lady and St Nicholas Church for the Brain Charity Trust and the Museum of Liverpool Life. At the Royal Liverpool Hospital, we raised £86.00 for their 'R Charity' in our allocated time slot. Understandably they have asked if will we return.  Liverpool One and Asda have also asked if we will return as they had so many positive comments from members of the public!

On Friday, 10th February, the choir sang at St George's Hall as part of the Narnia Experience put together by "Another Place". As a thank you to the choir for all their hard work and dedication, St Clare's paid for our children to be able to 'go through the wardrobe' and be a part of the Narnia experience itself as well as providing all their packed lunches. The children sang four songs repeated over an hour period for the benefit of other schools, including Amazing Grace, We Can be Kings and Queens, Wade in the Water and This Train is a Clean Train.

Each song had different soloists and everybody sang with their accustomed delightful style and energy. Once again, we had many compliments.

We are looking forward to what our future holds!

If you would like to become a member of our Gospel Choir, we take new children at the start of each term - September, January and April. Come and speak to Mrs Hughes to find out any details or to ask any questions. 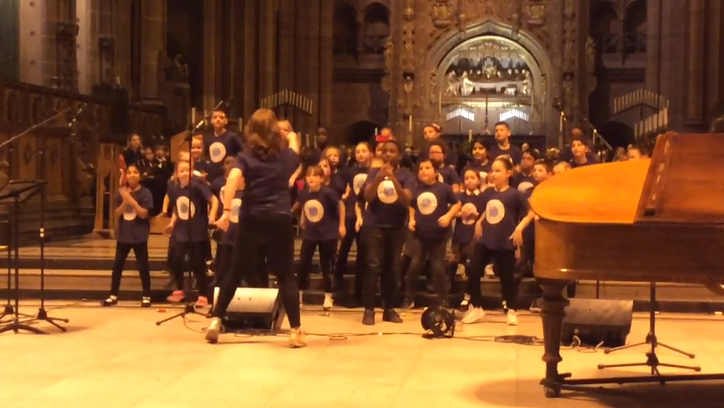 The Gospel choir performed in the Liverpool Anglican Cathedral along with a number of other choirs. They were truly inspirational.
Top
Cookie information
Cookie Notice